Also this year we participated in the Hackathon, which took place in the run-up to the OSIsoft EMEA UC. This is the third time in a row that we have tried to convince the jury. After a 4th place in the last year we were able to get ourselves this year with a third place again a place on the podium.

The data basis was provided by the DEME Group. The DEME Group supervises construction projects at sea worldwide. This includes the construction of artificial islands and the installation of wind farms in the sea. They use the OSIsoft PI system to organize the data volumes, from which we received a part to get the best out of it.
Three useful use cases were offered at the beginning. On the one hand, there was the possibility to detect errors in sensor data or to detect the process of pumping up a ship, which for example installs a wind turbine. A so-called “Jack-Up Vessel”.

The first thing that had to be done was to recognize exactly how such a process looks like and which parameters are necessary to determine what is happening at the moment. Logically, this included the height of the ship and the pressure on the lifting legs. In order to recognize the individual intermediate steps we have to “dig” a little deeper into the data. As an aid we used the software of our partner Seeq and were thus able to capture the pattern and find it elsewhere. The further goal was to create a model from the recognized states. We chose the Hidden Markov Model to capture the recognition of the states and to map the transitions between driving, standing, pumping up, installing, lowering and continuing driving.

The results received can now be written back to PI as event frames. The presentation of our results can be found in this PowerPoint presentation or in our blog entry in PI Square.

This year the award ceremony was unfortunately a bit later than last year and not all participants were able to participate. Nevertheless it was a nice sunny day as you can probably see on the picture. 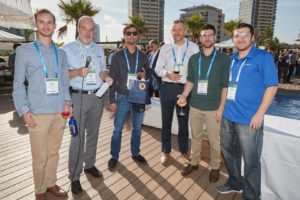